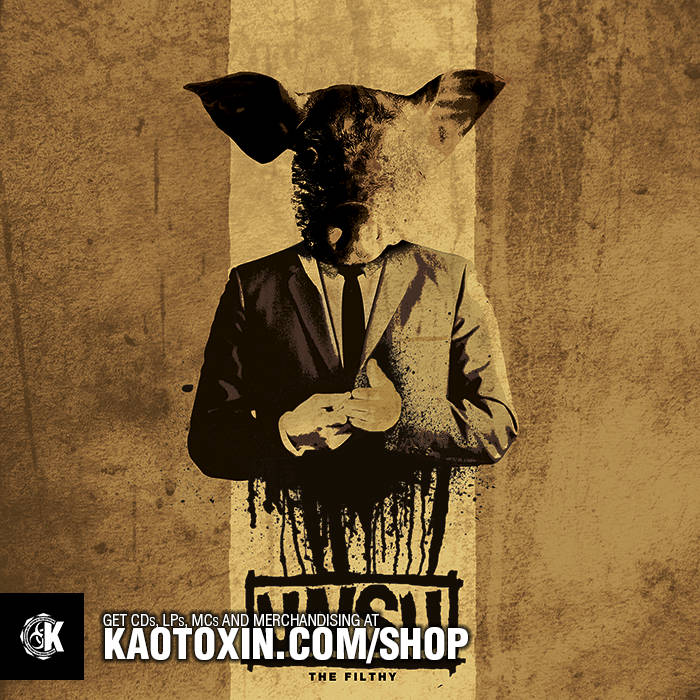 THE BAND
Started in 2009 by (past and present) members of DARKALL SLAVES, TREPAN'DEAD and PURIFY, UNSU worked hard to write and record their debut 13 tracks demo CDr, "Moral distortion" (Douchebag recs, 2010) which immediately gained them great opportunities to defend it live.

Their full of energy live performances and the catchiness of some melodic hooks into a sea of utterly brutal yet diverse Grindcore the modern way and their tightness as a live act earned them a great reputation of "a band that has to be seen on stage".

Playing the Lille WinterFest #1 (2010), the official Neurotic Deathfest after party (2011), the Arschcolio Fest (2011), opening for such renewed acts as GRONIBARD, Cliteater, Jesus Crøst or Decapitated, touring Europe (with Whoresnation in 2011) and releasing their debut split 7” with France’s Atara (Douchebag records, 2011) resulted in having the name starting to spread like blood on your face after a high-kick right in your fucking nose.

Now signed for a multi-album deal to KAOTOXIN Records, UNSU are releasing their debut MCD, titled “The Filthy”.

Remember that name: you’re just starting to hear about UNSU !

THE RELEASE
“The Filthy” featuring five brand new studio tracks, among which a cover version of Nasum’s smash hit “Time to Act” and no less than twelve bonus live songs recorded during the Lille WinterFest #1 for a total of 26 punishing minutes of modern, diverse, fast and brutal yet melodic and in-your-face Grindcore.

The studio tracks are sounding quite live, perfectly capturing the furious essence of the band’s renewed live shows but showing more diversity than on their previous releases, like on the title track which eventually adds a crushing and heavy as fuck Doomy dimension to the band’s already suffocating heaviness while the bonus live footage prooves how tight and efficient UNSU is on stage, demonstrating their urge to play like every show would be their last one.

The release will be supported by a headlining UK tour with Merciless Precision (”The Filthiest UK tour 2012”) on late February, during which “The Filthy” will be made available in exclusive advance for their UK fans, as well as by appearances at this year’s Underground Blast Fest (FR) and Grind The Nazi Scum (DE), all of this while starting the writing process for their forthcoming debut full-length which is planned for late 2012 / early 2013.